The Bonus Army: An American Epic 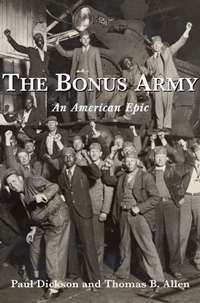 The Bonus Army
An American Epic

Paul Dickson and Thomas B. Allen

In the summer of 1932, at the height of the Depression, some forty-five thousand veterans of World War I descended on Washington, D.C., from all over the country to demand the bonus promised them eight years earlier for their wartime service. They lived in shantytowns, white and black together, and for two months they protested and rallied for their cause—an action that would have a profound effect on American history.

President Herbert Hoover, Army Chief of Staff Douglas MacArthur, and others feared the protesters would turn violent after the Senate defeated the "bonus bill" that the House had passed. On July 28, 1932, tanks rolled through the streets as MacArthur's troops evicted the bonus marchers: Newspapers and newsreels showed graphic images of American soldiers driving out their former comrades in arms. Democratic candidate, Franklin Roosevelt, in a critical contest with Hoover, upon reading newspaper accounts of the eviction said to an adviser, “This will elect me,” though bonus armies would plague him in each of his first three years.

Through seminal research, including interviews with the last surviving witnesses, Paul Dickson and Thomas B. Allen tell the full and dramatic story of the Bonus Army and of the many celebrated figures involved in it: Evalyn Walsh McLean, the owner of the hope diamond, sided with the marchers; Roy Wilkins saw the model for racial integration here; J. Edgar Hoover built his reputation against the Bonus Army radicals; a young Gore Vidal witnessed the crisis while John dos Passos, Sherwood Anderson, and Sinclair Lewis wrote about it. Dickson and Allen also recover the voices of ordinary men who dared tilt at powerful injustice, and who ultimately transformed the nation: The march inspired Congress to pass the G. I. Bill of Rights in 1944, one of the most important pieces of social legislation in our history, which in large part created America’s middle class. The Bonus Army is an epic story in the saga of our country

"A prodigious research project.... A revealing and bleakly fascinating account...The book's most haunting aspect is its verbal and pictorial record of the marchers' individual experiences...For all the defeats that the Bonus Army endured, its struggle paved the way for the G.I. Bill of Rights. And it underscored the power that could be unleashed by the marcher who made himself "a petition in boots." Its legacy was of great importance to the World War II veterans whose homecomings were a far cry from the hardships and indignities of the 1930's. That legacy is all the more meaningful today."
—Janet Maslin, The New York Times

"Dickson and Allen have written a thoroughly researched and spirited narrative of the Bonus Army. They have done yeoman work in mining the relevant archives, and their interviews with many of the surviving witnesses add new testimony to the record of the March . . . The Bonus Army has received much less attention than it deserves. But, with their readable and exhaustive account, Dickson and Allen have gone a long way toward remedying that situation."
—Tom Miller, Military.com

"In The Bonus Army, authors Paul Dickson and Thomas B. Allen, provide an astonishing, and largely forgotten, account of how our veterans, fueled by desperation and determination, anger and honor, overcame political obstacles and tactics as formidable as those they had faced on the battlefield. This is must reading, not only for today's political leaders, but for all Americans who understand the need to fight for the fair treatment of those we ask to carry the fight for freedom."
—William S. Cohen, former Secretary of Defense

"The Bonus Army is a terrific book. Exhaustively researched but simply written, it holds the reader's attention from beginning to end. I personally remember the momentous events of the July day in 1932, but before reading this account I had no idea of the drama, the pathos, the confusion, and the lasting importance of the event. Highly recommended for any reader who seeks a rounded knowledge of America of the twentieth century."
—John S. D. Eisenhower

"A tragic yet enormously important chapter in the making of 20th century America, beautifully and brilliantly told by Dickson and Allen. The GI Bill lifted ten million veterans into the middle class through vocational rehabilitation, low-cost home mortgages, college tuition, and living expenses. Without the Bonus Army tragedy, there never would have been a GI Bill. You cannot fully understand contemporary America unless you understand the Bonus Army."
—Mark Shields

"Meticulously researched and engagingly written, The Bonus Army captures the pathos and high emotion that this under-appreciated episode in American history generated in 1932. As the nation prepares to welcome home another generation of wartime veterans, it offers a cautionary and instructional tale about the permanent bond that modern military service creates between veterans and the state."
—Jennifer D. Keene, author of Doughboys, the Great War and the Remaking of America

"By a far stretch the best-written account of the BEF and the first scholarly attempt in nearly two decades. The authors, both experienced history writers, debunk many of the old myths and shine new light on this astonishing episode...In telling the story of "The Bonus Army," in a gripping style packed with facts, Dickson and Allen do great honor to all veterans -- and remind us that one of our most important battles was fought with blood and fire at the steps of our own government."
—Joel Turnipseed, Minneapolis Star Tribune

"This thoroughly researched and eminently readable book is one that every veteran, indeed, every American should read . . . Mr. Dickson and Mr. Allen have done a fine job of reminding Americans of the almost forgotten fight a relatively few of them made to finally shame the Congress into paying what in effect was a mere pittance in return for the sacrifices they had made during the Great War."
—Lyn Nofziger, The Washington Times

"The authors argue that this is one of the pivotal events of 20th-century U.S. history, and they make a good case....The benefits veterans have today express a stronger appreciation of service. This book is a reminder that they also have another purpose, which is to ensure nothing like this ever happens again."
—Bruce Ramsey, The Seattle Times

"Extensively researched and documented, "The Bonus Army" provides a valuable historical record as well as a timely look at how this nation has treated its veterans."
—Jewel Lansing, Portland Oregonian

"Before the Million Man March, the Million Mom March or Martin Luther King, Jr.'s March on Washington, there was the Bonus Expeditionary Force (BEF): 45,000 WWI vets who, in 1932, swarmed Washington, D.C., in freight cars, crank-start jalopies, on motorcycles and even on foot from as far away as Portland, Ore., to demand payment of the bonus promised them at the end of the war. As Dickson and Allen show throughout this empathetic and well-researched volume, the BEF meant different things to a number of groups vying for power in the tumultuous political climate of the early '30s. Communist organizers saw the veterans as the shock troops of the emerging "American Soviet Government"; the Hoover administration viewed them as mostly "ex-convicts, persons with criminal records, radicals, and non-servicemen" trying to strong-arm the government; and corporate America saw them as competition for dwindling government aid money. To most Americans, however, they were underdogs fighting the government and the corporate corruption that, in their minds, was responsible for the Depression. The book moves beyond these broad generalizations to find the personal stories of the march, fleshing out both minor and major players surrounding the BEF. And in describing the use of tanks, bayonets and tear gas to expel the unarmed vets and their families from Washington-as well as the deadly mistreatment of BEF members in government work camps after the march-Dickson and Allen highlight the sacrifices these women and men made on our own soil to win fair treatment for veterans of future wars. Their important and moving work will appeal to both professional historians and casual readers interested in the history of America's changing attitudes towards its soldiers."
—Publishers Weekly

"In 1932, approximately 45,000 veterans of World War I converged on Washington, DC. In 1924, they had been promised a cash bonus for their service, but it was to be deferred until 1945. With the nation mired deep in the Depression, the so-called Bonus Army demanded immediate payment. For two months, the protestors lived in shantytowns on the outskirts of the city and issued increasingly strident demands. Eventually, troops under the command of Douglas MacArthur dispersed them and destroyed the shantytowns. It was a sad but quickly forgotten episode as the politics of the New Deal and the looming threat of war in Europe and Asia came to dominate national consciousness. Dickson and Allen, who have written numerous books of American history, assert that the long-range importance of the Bonus Army has been grossly underestimated. In this agreeably written and often moving account, they describe a unique gathering of whites, blacks, and urban and rural poor united by a vision of social justice. This is an important reexamination of a still controversial event."
—Booklist

"Here a demonstrator is clubbed and tear-gassed, but there real reforms are won: thus unfolds this memorable story of a now-forgotten episode in 20th-century history...The lesson the New Deal government took home: avoid ticking off discontented veterans, whence the GI Bill. A lively, engaging work of history."
—Kirkus Reviews

For further information about
THE BONUS ARMY
or for review copies or interview arrangements
contact Peter Miller at Walker & Company
212-727-8300, ext. 3011.